One Ramadan night, me and my friends decided to go for some seafood. The restaurant is called Terminal Seafood and it's served buffet style. You cook them seafood at your table, either by putting it in the soup or just grilling them. 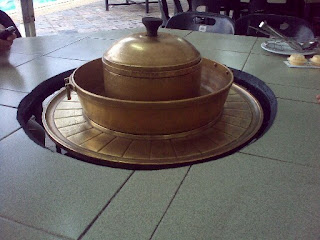 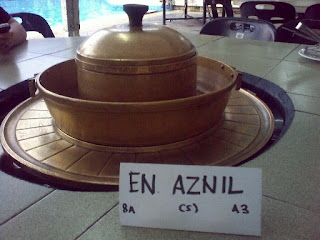 I was the one who made the reservation because my friend did not want to and they got my name wrong. Apparently I now host Tom Tom Bak on Astro. 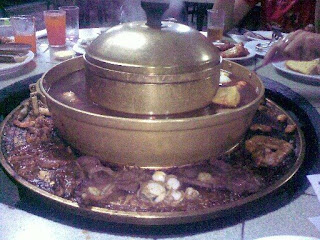 As soon as it gets near buka puasa time, we all dashed for the buffet line and grabbed whatever we can, I mean, want to eat.
Yup, that's the concept, grabbing raw seafood and cooking it at the table. 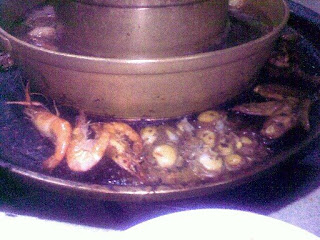 I managed to grab some prawns and scallops and grilled them with some butter. 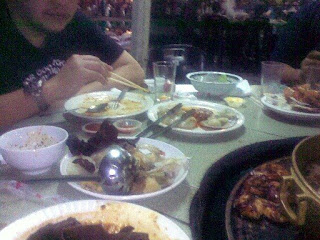 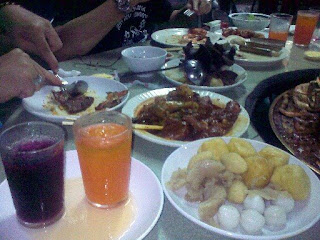 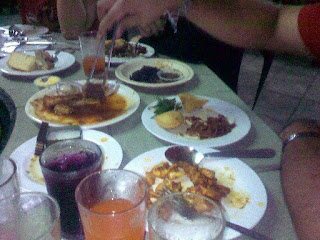 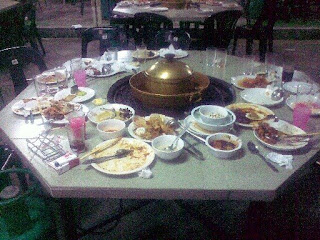 At the end of the dining dash, this (after the wait staff came and took dirty plates away once) is the aftermath. The golden grill thingy is now blackened and charred.

For Ramadan, they also served grilled lamb. Unfortunately, the lamb was taking forever, especially when the griller did double-grillage. The whole lamb carcass was already grilled. He then sliced some bits off and grill it again, until the bits are charred. Panzer thinks it's because it was yesterlamb and needed to be reheated.
This was the second time I've been there. The first time was better I think. Not sure why though. Oh, right, the selection was much varied the first time around. Maybe they're compensating for adding the lamb by regressing the menu a bit.
Venue: Terminal Seafood, Bukit Antarabangsa.
Cost: Rm58 per person
Foodie: Panzer, Iskandar, Teddy, Dzeng + 2 Friends
Posted by The Wan And Only at 1:09 PM

Terminal seafood is the best seafood place around kl. i've never been to the new place yet, but the old place in kg pandan was very airy and suitable for bbq dining - just wear ur dirty clothes as it surely will smell of butter etc at the end. chow

Heard that Terminal Seafood has moved to Bangsar. Anyone can advise its new address?