Last Sunday, we went to Al-Rawsha, Jalan Damai for some Arabic food. I think it was Lebanese, but I am not sure.

I am no expert on Arabic food since my experience with it was limited to a restaurant in Sri Petaling called Al-Diafah and also when I was studying in the States, an Arab student would invite us over for home cooked meal.

So, I was keen on trying out this restaurant. I just finished my shift at work and headed straight to KLCC (not before going to Avenue K to tapau a Subway Club for my colleague who drove me there) to get my phone setting right to receive MMS and Internet.

After that, it was a short cab ride to the restaurant. While waiting for Panzer to arrive, I scoped out the clientele. An impressive mixed group of all races. :) 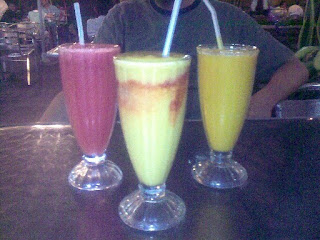 The drinks we ordered. Mine were the Al-Rawsha Cocktail (the one in the front with the streaks of red) and Watermelon Juice, while Panzer had the Mango Juice. 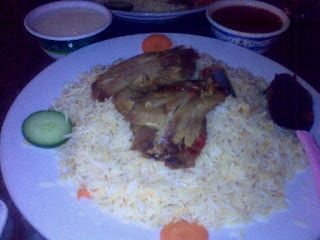 This is what I ordered. Lamb with Mendy Rice. Which was also what Panzer ordered. I wanted to compare Rawsha's Mendy to Diafah's. 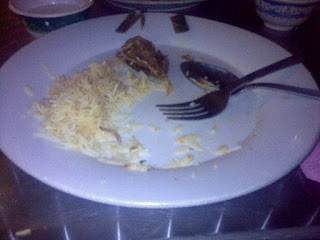 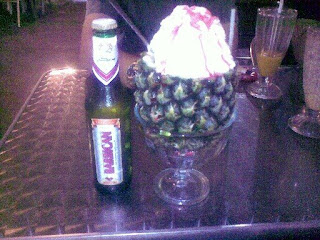 The Cocktail was interesting. They mixed some of the fruits but we could not quite put our finger on it. I know the base fruit was mango. But something else made it quite interesting. I think it was either pineapple or kiwi. Panzer thinks it's pineapple since there are fibers in the drink. Maybe they added apple as well. Hmmm, guess we'll never know for sure.

The rice was not bad, although I would prefer it hot. It was lukewarm at best. The lamb was also lukewarm. As a result, you can literally feel the fattyness of the meal on your lips and at the back of the throat. Then, it became a chore to actually finish the thing. Hence the unfinished plates. You should see Panzer's plate...

The desserts were okay I guess. I am a sucker for raspberry so I went for it. There was not much raspberry taste though. Sigh.

Pineapple glassie ice cream. Name's fancy. The actual thing is not. I thought it was more like shaved ice with pineapple and ice cream. Unfortunately, it was just vanilla ice cream in a pineapple shell. Daymmmn.

All in all, it was just an okay experience. The ambience was nice, and the 'view' was quite intriguing, to say the least. There was something for everyone. Hehhehe.

The Rawsha cocktail saved the evening from being a total waste. Oh, and I think the waiter did not charge for all our orders. Some orders fell through the cracks. :) 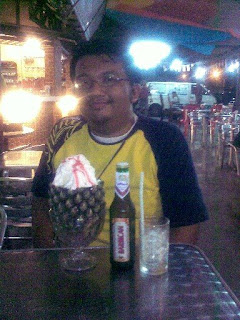 Been to Al-Diafah twice! but the pineapple seems cam sedap!