Panzer and Dzeng both were championing the buttered crab. Believe it or not, we are running out of new places to dine out nowadays. I'd like to shake things up every now and again. It's not really good to stick to one routine eh?

Anyways, so we all went to Bangsar Seafood Restaurant @ Bangsar One. It's next to Bangsar Village (but there's a BMW or Volvo dealership in between the two) and in front of TMC.

Apparently, they were having a discount for the crabs. It's supposed to be RM50 something per kg but not it's at 30 something...

The place is quite fancy. Very huge. Intimidating. But nice. :)

Panzer arrived first. I came from work. Yes, I am working 7 days a week these days. Huhuhu. While waiting for Dzeng and friend to arrive, we ordered first. 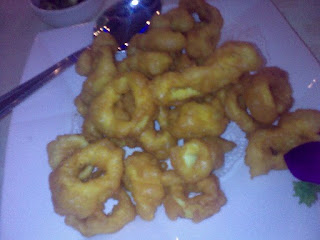 No meal is complete without calamari 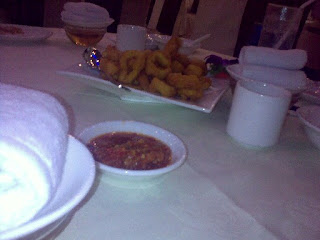 It came with a special dipping sauce. Not quite the Thai sweet cili sauce. Nice. 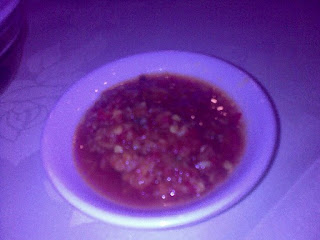 Close up of the dipping sauce 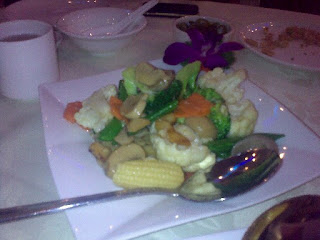 Garlic infused mixed vege, to be a bit balanced 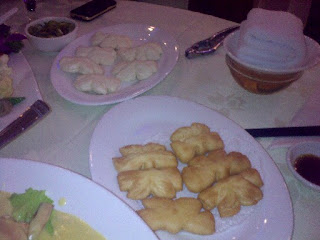 The waitress said that the buttered crab are normally noshed with these bread, one plate of steamed bread and one plate of fried bread 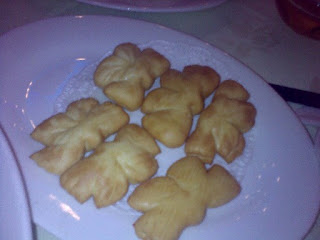 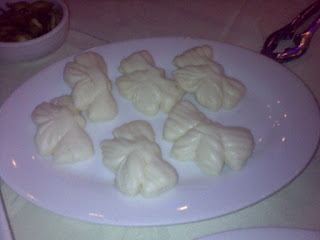 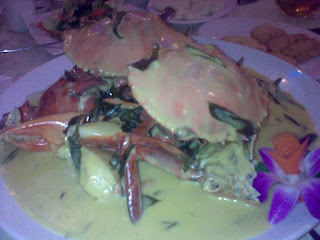 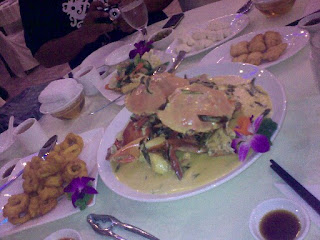 The complete meal (that's Dzeng holding up the camera, I was about to relieve Elsa of her snapping duties but Dzeng's camera conked out so Elsa still had to serve)

The crab was fresh and the buttered sauce was quite exquisite. Unfortunately, it reminded me a bit too much of Chicken Rice Shop's buttered chicken sauce. Guess it was the same recipe. Turn off sket la plak. Tempat mahal vs tempat relatively murah. Same taste. Go figure.
Dzeng ordered egg tofu dish to add on but we were in the midst of getting our hands dirty digging into the crab. So no pic...
The food was nice. But I was not really full. Silly me for not having the rice and opting for the bread. Plus it was my actual first time eating crab that huge and not in the house where we can just be as messy as we wanna be. Actually, my family rarely indulged. It was either prawns or fresh water fish or terubuk. Hardly ever dined on crab. Hmmm...
Venue: Bangsar Seafood Restaurant @ Bangsar One
Cost: About RM200
Foodie: Panzer, Dzeng, Dzeng's Friend (forgot his name...)
Posted by The Wan And Only at 12:25 AM